Time flies when you are having a good time and lately has been exciting!
I'm writing a children's story, book. I have done this before. This one is more 'story'.

And a new painting almost done. I kept waiting to figure out what it means exactly but That hasn't happened yet. It is mostly done. It is about 1967-68, I know that. The problems in Baltimore brought back memories of Berkeley-Oakland days. The scent of teargas wafting through the streets. Confusion and bad behaviors combined with heroic actions.This called WINDS OF CHANGE. 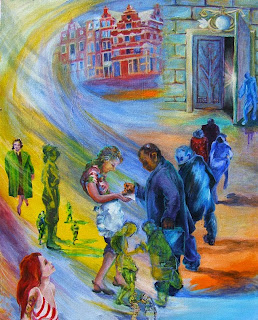 
Posted by Melanie Hickerson at 12:57 PM