I have a lot of postcards of various paintings over the years. Lately I have invested in 100 postcard stamps, using the postcards to advise the current President.   Here is some of the texts I have sent with this image.


2017-8-24, Dear President Dunce Trump,
I learned to write limericks feeding the beast,
But you show no interest in doing your job.
You’re conducting your duties without even your least,
Cultivating the desperate and pandering to the mob.


2017-8-23, Dear Pres. Dummy,
Your Rah-Rah in Arizona last night,
Demonstrates, illustrates Your spoiled brat rights.
I can’t continue to watch your political show.
It’s worse than even that TV low.


Instinct for the jugular


Is not as useful as a well-developed mind.


Your short-term gains of money or power,


Precedes your ridicule by All, in due time."


"2017-8-21 Eclipse Day, Dear Pres. Trumpilump,
You speak tonight for serious Afghanistan stomping.
Wall street Loves mass death and dumping.
Can you control your ego magnification,
When speaking to All the nation?"


Courage is counted first among virtues,


But this quality you lack.


Bully bluster is your substitute,


But won’t save you from being sacked."

"2017-8-19 Dear Pres. Bozo Trump
The news holds no power to cheer me up.
U.S.A. Leader in the White House is a putz.
No class, no style, much less wit.
But the lack of courage is the sorriest bit."

" 2017-8-19 Dear Doofus De-Trump,
You must thank the great Kwakiutl
For teaching his people to bathe everyday,
Making his faithful’s immunities nil,
Thus your ancestor’s habitual filth could kill."

Your good fortune is a gift from others,
Family built your distorted cushion,
Luck handed thus by forebears smothers,
And deluded you into a fool of the Russians."

" 2017-8-17 Dear Dooby Prez.
Don’t confuse your instinct for the jugular
with ability or wit.
You might discover a true mirror that shows
your profound character debit.
Bah-da-Boom!"


Then I have used this image for some.
" 2017-8-16 Dear Prez. of USA,
We humans forget the fragility that’s ours,
Building supports for malleable constitutions.
You are a threat
So Jesus wept
Over Trump’s predator institutions."

"  2017-8-15 Dear Prez. Trumpkins,
You play the racist rule
To manipulate troubled fools
Who willingly kneel,
To some superior feel
In your polluting pool.
Ha, ha, you big Joker!"


This is another image I have used on postcards to the current Leader.


2017-8-4 Dear Prez. Trumpy,
Poor Mussolini and so sad Hitler’s end.
But none so cursed
pitied by future Earthlings,
As You, the Grand Greed Goofling.


"2017-8-3 Dear Mr. President
Human beings write histories,
Prez. Trumpy in the midst.
Future parents will warn their progeny,
BEWARE! You could end like this!
(pointing at your image)

" 2017-8-2 Dear President Doofus Thrumpy,
Is getting massive jumpy.
No More family love, No more ties that bind.
Immigration only for fees and money."

" 2017-8-1, There once was a President Buffoon,
Who danced to a Russian tune.
He tried to eat money, dipped in raw honey
but choked by the light of the moon.
Dear Mr. President, A limerick for you! "

Posted by Melanie Hickerson at 6:05 PM No comments:

It is easy to find photographs and news about Monarch butterflies. So my story paintings have Monarchs. Such drama queens. That magnificent migration across the continent and flying in herds. 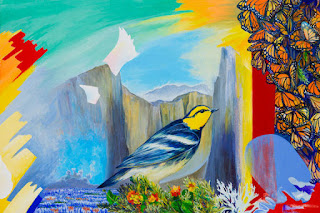 This painting has a golden cheek warbler, too. It is a very small bird. 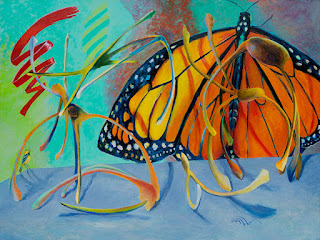 So I made the golden cheek warbler tiny and one big Monarch. The painting below has my Gran'ma Hickerson in the lower right corner. That painting is in a gallery in New York City, right now. 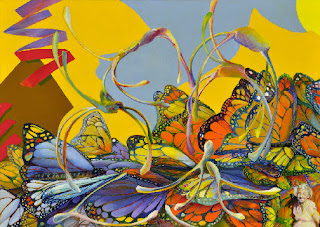 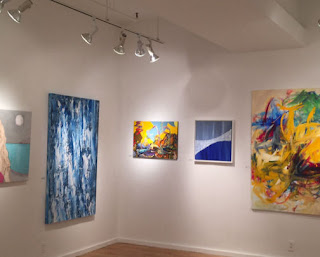 The gallery is in Chelsea on 27th street in a gallery building. My painting is dwarfed by others in the exhibit.
Posted by Melanie Hickerson at 2:55 PM No comments:

It's done. Now I am working on the frame. I think I will put some bees and flowers around the edge. 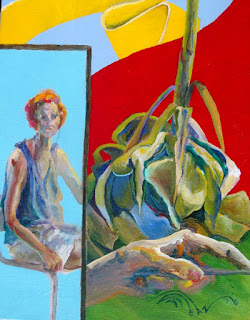 Posted by Melanie Hickerson at 7:47 AM No comments: